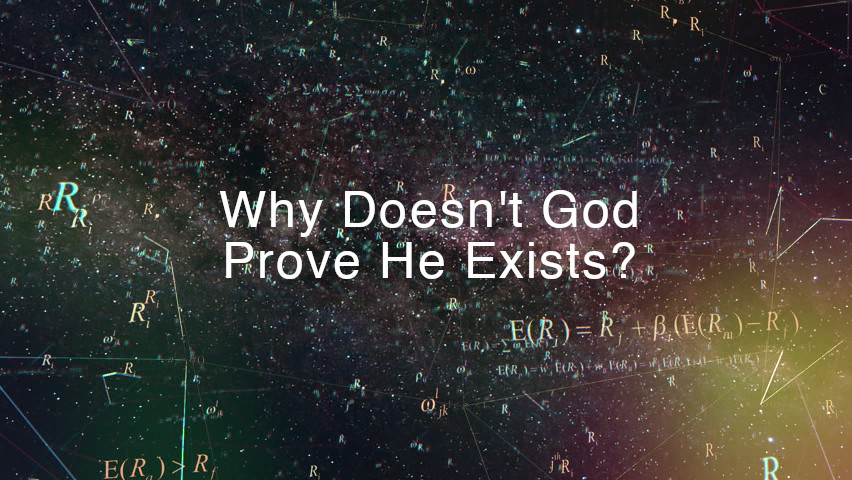 I once attended a debate between a prominent atheist and a Christian apologist. Tens of thousands of people filled an arena as the two took the stage. After sparring for about an hour, the moderator opened the floor for questions.

A young man in the fifth row immediately shot up his hand–clearly, his question was premeditated. After receiving a mic, he said, “My question is for the Christian—sir, I often hear about miracles and healings, but it seems to me that they are never verifiable. I’ve heard of Christians being healed from their arthritis, but I’ve never heard of arms growing back. I’ve heard of cancer being cured, but no one has ever grown a leg back. Why doesn’t God do miracles that can be tested and proved?

What this young man was asking boils down to this: Why doesn’t God make himself more obvious? Why leave ambiguity in science and history? The apologist fumbled for an answer, but none were satisfactory.

Why Doesn’t God Grow Back Arms? This question could only have one possible answer: God doesn’t want to. God is all-powerful, and He is free to work ‘above, beside, and against the laws of nature at his will.’ Westminster Confession 5.3 So if God wanted, He could prove his existence by growing back arms and legs. See Gen18:14

Why Doesn’t God Want to Prove his Existence? This question is at the root, and it turns out that we can find hints of an answer. But before we try to answer, we need to grasp three Biblical principles. I’ll attempt to prove each in turn, and then we will have what we need to reconsider this question.

Principle #2: Those who have more evidence of God’s existence are more guilty if they do not obey God.

Principle #3: Miracles are direct evidence of God’s existence, love, and plan for the world. Therefore, miracles exacerbate the guilt of those who do not repent.

This may be a very new idea to some–we normally see miracles as wonderful acts of grace. The reality, however, seen over and over again in Scripture, is that miracles bring both judgment and blessing. For example, the Israelites who saw God’s miracles in Egypt were judged much more severely than later generations, because they saw wonders but still did not repent. Or consider Jesus’ words to the Jews of his day. He condemned them, saying, “Capernaum, will you be lifted to the heavens? No, you will go down to Hades. For if the miracles that were performed in you had been performed in Sodom, it would have remained to this day. But I tell you that it will be more bearable for Sodom on the day of judgment than for you.” Mt11:23-24

God could grow arms back if He wanted to. Why doesn’t God want to grow arms back? Consider what would happen if He did? Such a miracle, at least done in the West, would quickly be broadcast on the evening news; scientists would wonder; Christians would marvel; everyone would have undeniable proof of the supernatural at the very least.

But then we would all go right back to sinning, as the men did in Jesus day. The news story would pass out of the news, and we would all be more guilty for ignoring the reality of God.

But they would be more guilty than before. Their sin would be exacerbated, like the sins of Jerusalem before it was destroyed in 70 CE. Some would repent, and those would receive grace, but most would remain unchanged. That is what we see over and over again when miracles are performed in Scripture. The miracle stories in Scripture are always coupled together with the judgment stories. That is no coincidence.

The Purpose of Miracles.

God is gracious, and He graciously uses miracles to point us to himself. They are little previews of New Creation. They hint at how things should be and someday will be. But God uses miracles sparingly, even in Scripture, for miracles are not the answer to our sin problem. Our problem is not that we don’t have enough evidence. Our problem is that we love ourselves rather than God. All the proof in the world cannot make us love God. Miracles may help a little when our faith is weak, but what we really need is heart surgery—to have God change our hearts and make them new. We need redemption.

So God’s says: “everyone who asks receives; the one who seeks finds; and to the one who knocks, the door will be opened” Lk11:10. In other words, God uses evidence (including miracles) to strengthen the faith of believers, but God will not prove his own existence until the events of Revelation.

I have personally witnessed two miracles, and I have heard first-hand accounts of many more. None of these are fully verifiable, at least not to the standards of modern science. They have encouraged my faith and reminded me of God’s love, but they are not the foundation of my faith. There is, however, one miracle that can be verified above all others. That miracle is the resurrection of Christ. Jesus’ resurrection is one of the most firmly established facts of human history. Libraries of books are filled with the evidence for it, and history is measured by it.

If you want proof of God’s existence, the Resurrection is the chief miracle to consider. But one word of caution: ‘Do not begin down that path unless you are ready to act based upon what you find. For if you see God and remain unchanged, you will gain nothing.

The better pursuit, as Jesus revealed to Thomas John 20:29, is to be among those who believe without all the proof, convinced not by axiom or argument, but by the beauty of knowing and walking with God. May we hear the same words of eternal life that Peter heard Jesus speak John 6:68, and the same testimony of sonship that He promised to those trust and obey God. Romans 6:18, 1 Timothy 3:13